In Its Latest Report On ‘Reinforced Thermoplastic Pipes Market’, Persistence Market Research Provides A Concise Analysis On The Recent Market Trends. The Report Further Includes Statistics, Market Forecasts And Revenue Estimations, That In Addition Highlights Its Status In The Competitive Domain As Well As Expansion Trends Adopted By Major Industry Players.

In the beginning of the 21st century, governments of developed & developing regions had imposed several stringent regulations over the industrial sector and had taken initiatives to support sustainability development. As a result, the industrial sector took several steps, such as the restructuring of manufacturing plants and manufacturing processes, restricting the use of toxic chemicals and development of products, to support sustainability development and comply with government regulations.

Along with this, manufacturers started optimizing processes and increasing the recycling rate and utilization of cost-effective products. In the industrial sector, pipes are imperative for the transportation of utilities, chemicals, and water and bulk materials, among others. In several industries, such as chemicals, oil & gas, and polymer & plastic, pipes are used to handle high – moderate pressure stream, corrosive liquids and toxic chemicals, among other, owing to which pipes often corrode or may fracture, leading to economic losses. For instance, in 2013, China Petroleum & Chemical Corporation companies’ Donghuang II oil pipeline exploded. The under-ground pipeline had corroded, which led to a spillage, and caused around US$ 124 Mn loss with around 64 fatalities.

In the oil & gas industry, majority of losses occur due to the fracturing or corrosion of pipelines; hence, to avoid such instances, the industry seeks cost-effective piping solutions that can sustain a high pressure-corrosive environment. In line with this, several pipe manufacturers, in collaboration with the oil & gas industry and research institutes, developed a piping solution – reinforced thermoplastic pipes.

Reinforced thermoplastic pipes comprise three layers, namely the thermoplastic liner, the structural layer and the protective layer. Generally, the structural layer is a helically wrapped high-strength fiber, such as aramid and steel, that provides strength to the pipe. The outer layer and liner are made of polyethylene raised temperature resins and high density polyethylene (HDPE), which can be used for high strength, high temperature resistance and for slowdown crack growth. Reinforced thermoplastic pipes mainly find applications in oil & gas and irrigation sectors, among others.

Recovery from Downturn and Organic growth of Oil & Gas Industry

Recuperating oil & gas prices, coupled with prompt growth in the demand for oil & gas from end-use industries, such as chemicals and polymer & plastics, are the major factors that support the growth of the oil & gas industry. With this steady recovery of the oil & gas industry, several manufacturers are emphasizing on the expansion of new facilities and completion of previously planned production facilities that were withheld during the downturn period. Furthermore, manufacturers are focusing on the development of oil & gas distribution network (i.e. transportation pipelines) to cater to the rising demand and ensure continuous supply of oil & gas to end-use industries across the globe. Aforementioned organic growth and development of transportation network in oil & gas industries are estimated to drive the demand for the reinforced thermoplastic pipes over the forecast period.

The global reinforced thermoplastic pipes market can be segmented on the basis of size, inner layer material, reinforced material type, application and regions.

Research and development, followed by product trial, and its respective market approach will support the growth of the reinforced thermoplastic pipes market and in turn, will help increase the profitability of products. Further, consensus between end user and manufacturer for long term supply and related services will provide addition benefits for market growth. 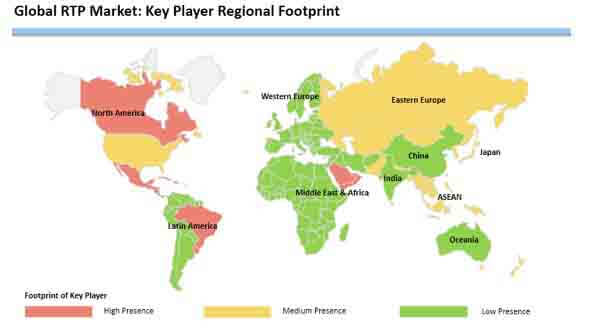 FMI will follow a modelling-based approach and triangulation methodology to estimate data covered in this report. A detailed market understanding and assessment of the nature, product type and end uses of the product segments covered in the study is followed by a demand-side analysis to estimate the sales of target product segments, which is then cross-referenced with a supply-side assessment of value generated over a pre-defined period. The statistics and data are collected at a regional level and consolidated and synthesized at a global level to estimate the overall market sizes